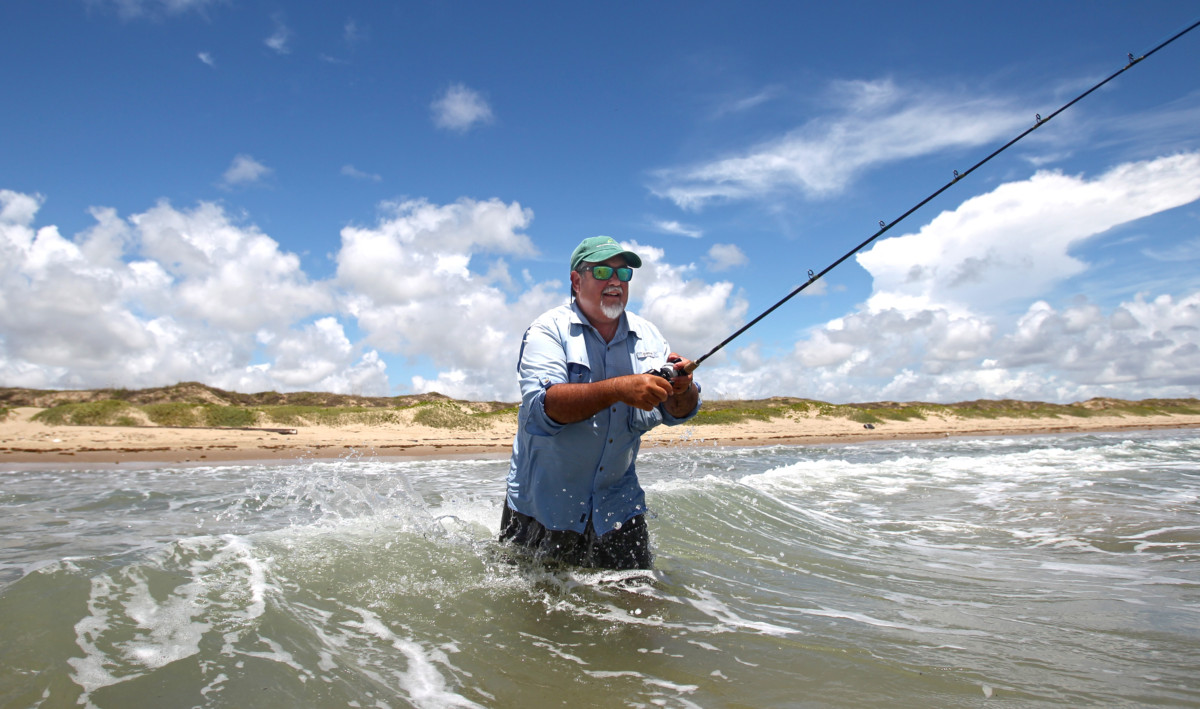 FlatsWorthy President Chuck Naiser recently sat down with member and all-around good guy David Sikes. David is well known within the community as an outdoor writer of over 22 years. His love of the outdoors is matched by his desire to see the resource enjoyed respectfully by all.

Where did you grow up?

DS: I was born on the southern coast of Louisiana, in the little town of New Iberia. I lived in Louisiana for 16 years. Growing up, Dad and I mostly went freshwater fishing. But the family visited the coast several times a year. I caught my first speckled trout in the surf at Grand Isle. I caught it on a Mr. Champ spoon. Around 1972, my family moved to Houston, where my dad had accepted a job at M.D. Anderson Hospital. I graduated from high school there, then went on to earn a journalism degree from the University of Houston.

How did you get into sports writing?

DS: By accident. I worked my way up through 3 small newspapers, then took a job as a news reporter at the Caller-Times. My predecessor, Buddy Gough, (who I thank every time I see him) decided to retire after my first year. I campaigned for the job aggressively to the publisher, and told him he didn’t need to post the position, because I was his man. That was in 1998.

How has fishing changed over the past 20-30 years?

DS: Regulations certainly have changed, that are now law. Plus, everyone noticed the rise in fishing pressure. In 1998, the state was just beginning to look at certain aggressive conservation measures. This resulted in the Sea Grass Wars. That got started by some folks who were mostly kayak-fishing enthusiasts. They were tired of being run over by motorboats and airboats. They were essentially campaigning for a quiet zone, but that proposal didn’t fly. What did happen is that Texas Parks and Wildlife designated about 32,000 acres as the Redfish Bay State Scientific Area. The main restriction in that area prohibited boaters to dig a trench in the seagrass with an outboard propeller. Voluntary compliance resulted in about a 40% reduction in seagrass scarring. I consider that a success.

Regulations slowly tightened in other fishing regulations. Trout regulations changed and evolved into today’s statewide five-trout rule, among other things. Probably the biggest evolution in bay fishing was the 15-year boat loan and the shallow-water performing boats, which salesmen said could run in spit.

If I’m going to promote recreational use of our natural resources then I’m damn well going to promote the conservation of those resources. It annoys me that some people who claim to love the outdoors, display behavior that suggest otherwise.

What’s been your most interesting story?

DS: Gosh, I couldn’t pick just one. But I’ve done several series of stories on my pet topics. I earned the Seagrass Hugger label because I promoted sensible rules against seagrass destruction. I wear this as a badge of honor. I’ve promoted freshwater inflows from rivers into our estuaries. Without freshwater, and the nutrients they bring, our bays would die. The reckless practices of people who waste freshwater is sucking too much water from the rivers and reservoirs, and therefore stealing it from bays. I’ve had a hard time selling this natural fact to the guys who live near our reservoirs. They think I’m anti-lake, whatever that means. But I firmly believe that when it rains in our watersheds, some of the water that would have flowed into our bays should be allowed to do so. It’s a reservoir, not a lake. And God or nature intended rivers to flow into the sea. The water rights may belong to the people of Corpus Christi, along with other towns and industries. But the bays belong to everyone.

You’ve fished basically all over the world. What is your favorite place to fish?

Any place in the Caribbean, Mexico, or Alaska. I definitely prefer the Atlantic side. It’s warmer, it’s a year-round fishery, with a great variety of species. Some of the most beautiful places to fish are remote countries like Nicaragua, Panama, and some areas of the Yucatan. These are fly-fishing meccas. I used to annually visit the Atlantic coast of Florida. They have more species that will eat an artificial lure than we have species, period. I did a story where I caught 9 species of fish on a single lure in the Indian River Lagoon area of Florida. That’s impressive.

How has conservation fit into your life?

DS: It’s equal to the recreation. You don’t have one without the other. It’s my obligation. If I’m going to promote recreational use of our natural resources then I’m damn well going to promote the conservation of those resources. It annoys me that some people who claim to love the outdoors, display behavior that suggest otherwise. When you see discarded hooks and fishing line on shorelines and jetties, you know these people do not respect the outdoors. How many ways can you tell people that littering is bad?  It strangles turtles, severs limbs off birds, and kills fish and other wildlife. It’s our responsibility to protect them.

Conservation also means doing the right thing by our fellow anglers. Once a year, I’d write about boating courtesy. But I don’t think the culprits ever recognized themselves in the irresponsible behaviors I described. Or maybe they don’t care. Some of the worst people on the bay don’t have any shame. The best way to change to behavior within a culture is to loudly and repeatedly point out what is expected of reasonable adults. It’s got to start somewhere.

How did you become associated with FlatsWorthy?

DS: It started with a friendship with Chuck. He started talking about this way before he instituted FlatsWorthy. We just started discussing some of the asinine behavior. If anybody doing what we were talking about would be inconvenienced by the same behaviors, you would think their attitudes would change. Instead, I believe many simply say “Well, everyone else is doing it.” My reaction would be the exact opposite. I think if we think we can get enough like-minded people to buy into this, if we could firmly attach a negative stigma to childish behavior on the bays, maybe eventually the FlatsWorthy movement will grow. We have to talk about it. You have to spell it out, don’t leave anything to chance. It’s important to codify what FlatsWorthy stands for. No questions, no ambiguity. Ignorance is part of the problem.

How important do you see the message of FlatsWorthy?

DS: Because the bays are becoming more and more crowded, it is imperative that we do something now. This should have started 10 or 20 years ago. Parks and Wildlife has been telling us that the next 20 years the population is going to double. Like Chuck says “They aren’t making any more water, but they sure are making more boats.”  With more crowds comes a higher level of ignorance, a higher level of misbehavior, and a greater number of people who inconvenience others by their misbehavior.

This movement has really been taken up a notch, and is gaining speed. We’ve got the right driver, and the right people. We’ve got some great projects in the works. The hardest thing is getting to be known. Once we get someone’s attention, we can convince them we are on the right track. I’ve never met a sensible, reasonable person who doesn’t agree with almost every concept we are trying to promote. They may have witnessed some or all of the misbehaviors we’re against, but they certainly would like to be the recipient of a higher standard of courtesy on the water. Everyone wants that.