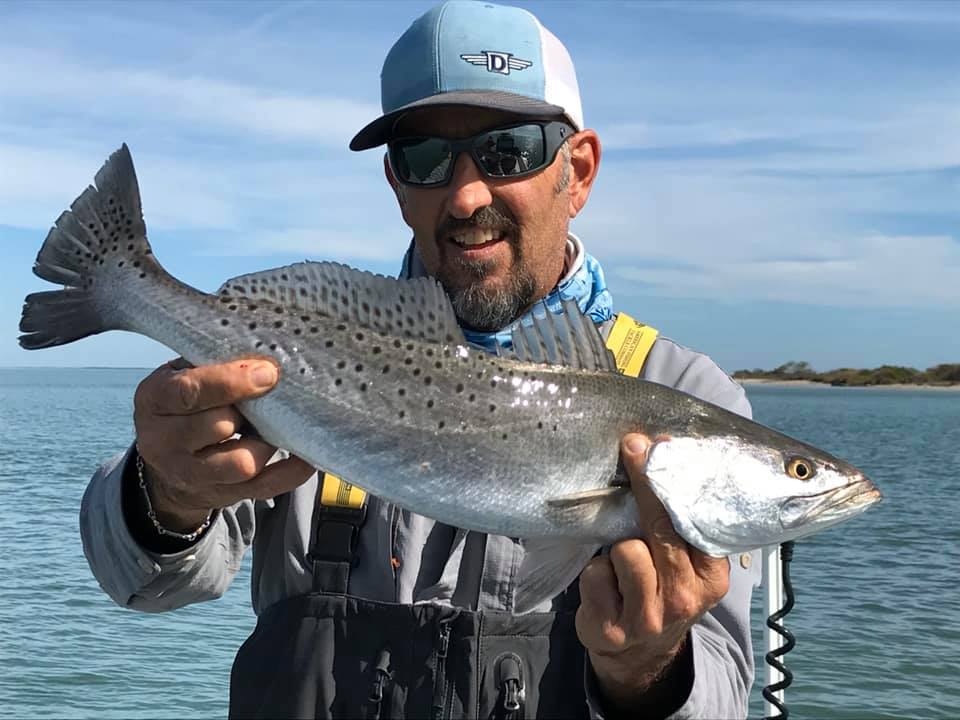 FlatsWorthy President Chuck Naiser had a chat with Dean Thomas about the future of FlatsWorthy, development in our area, and his heart for working with kids in the outdoors. Dean is a kayak guide out of Aransas Pass, and also an involved community member.

Chuck Naiser (CN): Where did you grow up?

Dean Thomas (DT): I was born in Houston and I fished from a very young age in Galveston Bay. It’s where it all began. We had a cabin on Chocolate Bayou. When I turned 18 I bought a camp in Matagorda. I spent the next 15 years fishing there.

There were two guys who lived in my neighborhood. I was just a little kid and I looked up to these guys like they were fishing gods. They went fishing and they always came in with fish. I wanted to figure out how they did it. They would drift reefs in Matagorda Bay and throw tails and topwaters and it just amazed me. When I got to go with them, man, it was as good as it got. They weren’t there to teach me. They were like “Shut up and come on.” I watched everything they did. I just thought they were so cool.

CN: What brought you to AP?

DT: I was working in the oilfield and I got transferred from Houston to Corpus Christi. For 5 years I worked doing oilfield inspections and I just took a chance and started my guide business at 35 years old. I always wanted to try, and I just quit my job one day and started it up.

CN: What is the focus of your guiding?

DT: I was initially guiding like everyone else out of my boat. I worked part time at Chris’ Marine when I was starting out guiding because I was real hungry, you know? He was selling kayaks when it was still Anchor Marine. I bought a kayak from those guys and started fishing.  It was just so cool, I loved it. I got the idea to buy more and started renting them.  Then I started, along with guiding out of my boat, I was renting kayaks, then guiding out of them. Then more people wanted to go kayak fishing. It just developed from into something I just incorporated into my guide business.

CN: How did Harvey change you?

DT: That’s a good question. Of course it devastated the business for a year. Coming out of the hurricane, it just taught me to, well, I had to rebuild my business in a way. I had a year of not making money but spending money to rebuild. There weren’t too many clients around. It seemed like we had to work twice as hard to compete with the places that weren’t affected by the hurricane. It was hard to get customers to come back because they thought of us as ground zero. And they didn’t return. They had a year of fishing somewhere else. I just had to learn how to build it back up.  The guide trips have gotten better but the kayak rental business has definitely faded away. It changed from a lot of random walk-in customers to pre-reserved guiding fishing trips. We have a rental cottage, too.  We have Winter Texans who rent it, summer weekenders. It tends to be consistent.

But it’s coming back. We spent one year rebuilding the office. And I did it all on my own. We could have easily folded it up and gave up, but we were persistent. We just knew we had to do it. We just kept hoping that there’s a light at the end of the tunnel. I had more trips in the last three months of last year than the last two years altogether.

That sense of adventure I try to give to those kids. I have so many people I learned cool things from. I try to convey that. Even the grown up groups, they don’t always show their amazement the way kids do, but they learn something. These kids, I only hope for the future of our bays.

CN: In my opinion you have a very strong motivation to educate kids. And the blunt question is: Why?

DT: When my two boys were growing up I got involved with the Boy Scouts. They got a little flyer from school. It really started with taking those kids to Scouts and being a Scout Leader. I was a Scout Leader for 15 years. Great memories, great kids. As scouting evolved and the kids grew up, I stuck with it. I always well… I was almost a teacher, I thought about being a teacher at one time. So it’s kind of like teaching, but in a different kind of program. We did so many activities, camp outs, fishing trips. But it kind of came to an end. But recently I’ve been involved with the 4-H, so it’s kind of going again. I enjoy going out with those kids. What’s cool is you watch them explore. You throw the net. What is so simple to us, you pull in a little shrimp or a little crab and they think it’s the coolest thing. I’ve got little bottles you can put them in and look at them. They always are elated to see it’s the same shrimp you eat in the restaurant, it’s the same oyster you eat in the restaurant.  I love it.

CN: Do you think it goes back to those two guys and recognizing the value of mentorship?

DT: Not specifically those two guys, but everyone along my life who shared those things with me. Along the way I’ve met a lot of people who traveled and were just adventurous. That sense of adventure I try to give to those kids. I have so many people I learned cool things from. I try to convey that. Even the grown up groups, they don’t always show their amazement the way kids do, but they learn something. These kids, I only hope for the future of our bays. They have to know what’s out there, the challenges.

CN: I agree. I think it’s super important to open the door and invite them into our realm. They need to know there is a place for them. And what you’re doing is important and I appreciate that.

CN: Would you be interested in being that steward for a FlatsWorthy Youth program?

DT: Absolutely!  If a separate youth group was in the future, that would be great. Opening it up to the youth, man, they grow up fast. You have to plant the seed when they’re young. When they get to that upper age it’s hard to get them interested.

If there’s any way I can help with that, absolutely. Cool. Especially with the 4-H program, there’s an opportunity to engage these kids.

CN: What areas does FlatsWorthy need to focus on?

DT: I’m happy with the direction FlatsWorthy is going. We started out as an idea, and we have evolved as needs have arisen. We have met other needs that suit a group such as ours. I think as time goes on we will constantly evolve. As long as we will stick to our COAR [Code of Angler Respect], etiquette will have to be there. The things we have taken on are all very relative. In the grand scheme of things, we fit in amongst the other conservation groups, other people out there who are working for the same results in a different avenue. I’m very happy with the way we’ve grown. No one can ever predict what’s going to happen in the future; but as long as we stick to what we are committed to, and be open to whatever the need is, we will be successful.

CN: What are your feelings toward development in your area?

DT: I went to an interesting presentation a couple of nights ago and they listed all of the projects. To see them all together was kind of overwhelming. It breaks my heart. I watched them build these tanks over here at Ransom Point. It’s heartbreaking, but it’s going to happen. We have more industry in this part of the world than anywhere else. It’s a goldmine, anyone would be happy to have that kind of money coming into their community. I kind of had a bad attitude, I was about ready to give up. What can you do? You can’t fight that kind of money. But through conversation with other people I realized what is important is to keep pressure on those companies to put money back into what’s important, the ecology. To make sure they invest back in to the area, the community, the economy. We have to get as many people as we can to remind industry that there are people out there that care about other things.  Somehow we have to find a balance. You have to have a balance with conserving and preserving what we have left, and development. You’ve got to get something in return. When one person speaks up it represents everybody else. Even in spite of my bad attitude on some days, I realize that the more you speak up the better it is. You’ve got to keep trying.

CN: What do you see as issues of the future?

DT: I’m gonna fish off into the sunset. (laughter) Trying to shake off the stigma of the hurricane. The people, the congestion, the tournaments, the biggest challenge is accommodating the people who are coming to the coast. They’re not making any more flats, but there’s a bunch more people coming our way. And we need to deal with the pressures on our fisheries. Hopefully catch and release works itself more into the coastal scene. If you look at Florida, they tend to be ahead of us in that regard.  They are dealing with the population issue that Texas will be dealing with in the future.