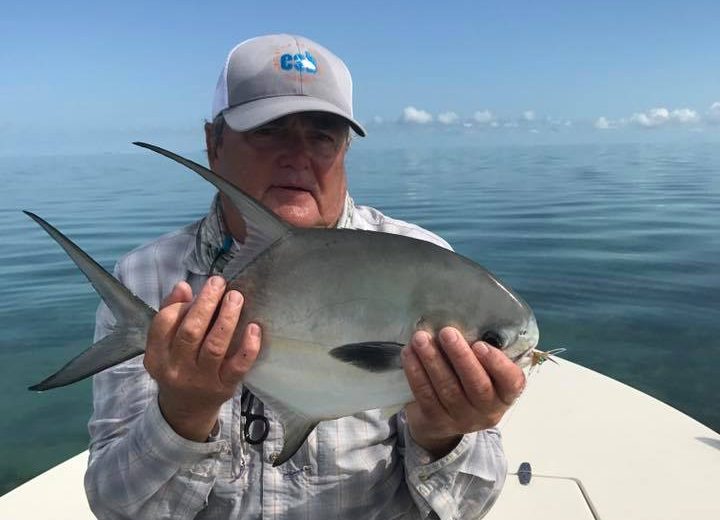 FlatsWorthy President Chuck Naiser recently sat down to chat with Billy Trimble. Billy was an early supporter of FlatsWorthy and is the Vice President. He has been an advocate of conservation on the coast since he has been coming to this area.

When did you start fishing in Rockport?

BT: I started fishing Rockport in 1980. I was living in Austin at the time. I had a good friend, the founder of the Austin Angler, Robert McCurdy, that was a strong influence on me to start fly fishing in saltwater.

What impressed you the most on your first trip?

BT: The beauty of the resource, the incredible ecosystem, and the fish. At that age I was singly focused on fish. I fished mostly in Redfish Bay.

What are some of your early memories?

BT: My addiction to sight casting can’t be overstated. It’s something that even today I still have that same rush of adrenaline when I see redfish tailing or bonefish tailing, that early addiction was what caught me. The longer I spent in this ecosystem, the greater appreciation I had for how fragile it is, how critical it is to the life of the coast, and what an incredible resource it is. The bird life, the plant life and the realization that this is it for Redfish, they exist no where else on the planet. The Gulf of Mexico is their sole habitat, a little up the Atlantic coast but mostly the Gulf coast, for Redfish. Bonefish, Tarpon, Permit and other tropical fish occur anywhere in the tropics or sub-tropics but this is it for Redfish. I feel like to a large degree we Texans do not appreciate the incredible resource we have at our doorstep.

FW: How has the face of Rockport changed over those years?

Since we’ve been dealing with Covid-19  the boat  traffic has been reduced the last few weeks and you can see a remarkable change in fish behavior, they are patterning back to the way I used to see them pattern in the 90s. To underscore that, I took a gentleman fishing who started his fly fishing career about 5 years ago, when we took a break for lunch he turned and  said “This is the best day of fishing I’ve ever had.” I told him “Yep, it’s amazing the difference in this fishery today versus a couple months ago due to the lack of boat traffic. This is how it used to be, this is what it could be like.”

FW: In regards to major events like netting , algae blooms  ( red and brown tide ) Freezes of ’83 and ’87, Hurricane Harvey, what do you think has had the most negative impact on our fishery here?

BT: If you’re just talking about population,  the big freeze we had in the early to mid eighties, after that fish kill, if you saw a redfish in the course of fishing you had a good day, I would rank that as number one in regards to impact on the fish population. And of course the drought we went through recently from about 2005-2011, the water in the bay got so hyper-saline the food chain started disappearing. Towards the end of that drought if you saw a crab in a week you had a good week. I spend time fishing the Upper Laguna  Madre and Baffin Bay, and towards the end of that drought you couldn’t go into Baffin Bay, there were so many dead fish that were killed by hyper-salinity, there were huge rafts of dead fish and the Black Drum were dying of starvation because the food chain had disappeared. In Aransas Bay our salinity was about 6 times saltier than the Gulf of Mexico at that time, in Baffin Bay It was about 12 times saltier than the Gulf. If you didn’t flush your motor as soon as you got out of the water it would turn into a salt block. As far as fish population goes, the freeze and then the drought, due to the lack of fresh water. With no fresh water coming down the rivers and no rain hyper-salinity really impacted the food chain.

FW: What do you see as the major threat to the viability of our fishery today?

BT: Looking at the shallow water portion of the fishery, the major threat I now see is overuse, boat traffic, too much boat traffic. Boaters running in shallow water just because they can.  This ecosystem was definitely impacted by hurricane Harvey, but that ecosystem had been made more fragile due to all the boat traffic back in the shallow parts of the estuary, burning shorelines and grass beds. When the hurricane hit, it hit a very fragile ecosystem that had had a lot of pressure put on it. The shorelines were not in good shape from erosion due to boat traffic, when Harvey hit the shorelines just disappeared.

FW: So many of these changes are not made as result of fishermen being back there, they are more of an evolutionary change. But my goal is to make the users of this resource more aware of how we contribute to that decline by improper usage, or we can let these things heal  naturally by being a better steward.

FW: I don’t personally advocate limiting anyone from going in these places. If I go to a spot and someone is there, oh well, they beat me to it. But the overcrowding can be eliminated by the simple act of Respect for our fellow people. I don’t want to limit anyone from going anywhere, but be courteous.

BT: That is the conundrum. We can not legislate common sense and courtesy, those are things we are supposed to learn early in life. What we can do is teach by example, GOOD EXAMPLE. When we have people on our boat and we have a spot in mind we want to fish, we get there and see someone is there we can go somewhere else. Not only do we teach the people on our boat to respect others, but the people who are in that spot see us turn and leave, they see that respect. We can teach how to respect the rights of others by exercising mutual respect, teaching by GOOD EXAMPLE!

FW: The people you can’t influence are in the minority. It’s about leading by example.

BT: To quote Scott Sommerlatte, “The hardest thing to not be is a hypocrite.” to which I add is “The easiest thing to do is nothing.” But we can strive to do better. Don’t take shortcuts. Respect other anglers. Give them the room they deserve, and hope you get that respect returned to you.